My day 18 project was Glass Bottle Pendants. I had these tiny 1″ glass bottles I had snagged on sale last year, but they have just sat around lonely and unused since. Today that changed!

I’ve seen many bottle jewelry ideas on Pinterest. There are the candy bottles, a “message in a bottle”, health and mana potion earrings, and.. well really, there’s so many ideas out there! My original intent was to first try confetti pieces before trying beads, but as soon as I pulled them out my husband asked me if I was going to make some health and mana potions with my seed beads, so I rolled with that!

The screw eyes I used were pretty large compared to the bottles, but were the smallest we had in the house. They worked, but just look oversized, so I may swap them out later on. I also considered pushing an eyepin through the cork and wiring it up that way and may try it later on.

Putting the bottles together was simple. It honestly took me longer to take that picture at the top of this post than it did to make the two bottles. The hardest part was screwing the screw eye in and keeping it straight and centered. The result is a couple of very attractive “potion” bottles! There’s so many different things you can do with these and they’d make cute stocking stuffers. 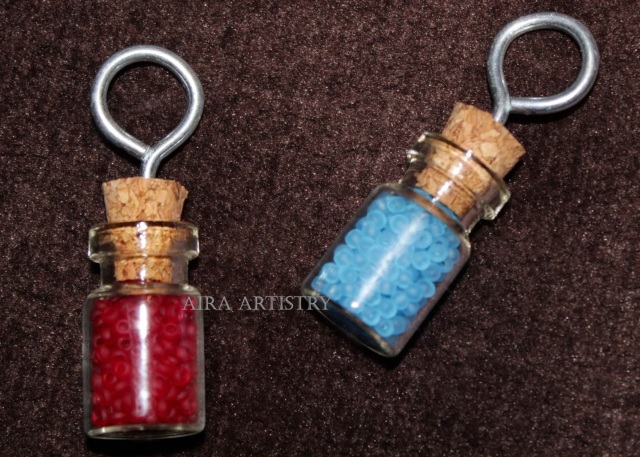 Tomorrow is Whipped Cream Dollop day, which will be the first food-related project I’m tackling (there’s several more in February and March)!