This month I was out of town for ten days and, as a result, didn’t spend much time with my nose in a book. During long car rides I caught up on the spring issue of Dunes Review; on the side I tackled another Netgalley ARC, read Ruby Dixon’s latest release, was thoroughly amused by KFC’s Mother’s Day “gift” to the literary world, and finished the Wager of Hearts series.

Yes, you read correctly above—this is where I review KFC’s novella, Tender Wings of Desire. Reviews are in order of date read. (My star ratings are explained here.)

Michigan Writers literary journal, Dunes Review, released its first issue for 2017 in late April. I attended the reading and was quite impressed by the variety and quality of various works inside. After reading through the entire issue on vacation, here are my favorites:

You can check out the entire issue for free online, and support Michigan Writers by purchasing archive copies here (scroll to bottom).

Ever since Emma read Pride and Prejudice, she’s been in love with Mr. Darcy and has regarded Jane Austen as the expert on all things romantic. So naturally when Emma falls for Blake Hampton and he invites her home to meet his parents, she is positive an engagement is in her future. After all, Blake is a single man in possession of a good fortune, and thus must be in want of a wife.

But when it turns out that what Blake actually wants is more of a hook-up than a honeymoon, Emma is hurt, betrayed, and furious. She throws herself deeper into her work as CMO of Kinetics, the fastest growing gym franchise in the nation. She loves her work, and she’s good at it, which is why she bristles when her boss brings in a consultant to help her spearhead the new facilities on the East Coast. Her frustration turns to shock when that consultant turns out to be Blake’s younger brother, Lucas.

Emma is determined not to fall for Lucas, but as she gets to know him, she realizes that Lucas is nothing like his brother. He is kind and attentive and spends his time and money caring for the less fortunate.

Lies Jane Austen Told Me isn’t scheduled for release until early November 2017, so a full review will be posted closer to that time frame. I did read it this past month for Netgalley, so here’s a few notes for now:

The above and more will be further discussed in a thorough review later this year.

This novella (book #2.5) stars one of the background players of Herkness’s Wager of Hearts trilogy. If you’ve read the first book or two, you will likely appreciate the story, but it doesn’t have much substance on its own.

As a girl, she had burned like a wild, blazing torch. Now her intensity was as sharp as a cutting laser.

Both characters have their strong and weak points in this story. Liam is a competent and kind character, though why he didn’t reach out to Frankie sooner is befuddling. Frankie is more jaded than we’ve experienced in previous books, yet despite this her proclaimed defenses drop far too quickly (but this is forgivable in a novella). It does get ridiculous to hear Frankie harping on an eight-year age difference when both parties are in their 40s. As a young 20s/teen, eight years are a big deal, but it quickly becomes unnoticeable, which I imagine our heroine would have thoroughly realized.

The reader doesn’t need the constant reminders that Americans say “soccer” and the rest of the world says “football”. One joke/reference to it, fine, but it was a frequent mention throughout.

This story drags on because not much really happens aside from much rehashing of their past over the span of a few days. For the background Herkness gave these characters I think that was hard to avoid, but it didn’t make for a particularly intriguing read. Thankfully a nice epilogue wrapped everything up, and has more resonance after reading the epilogue for book 3.

“I said I would find you, wherever you are.”

The Irishman’s Christmas Gamble, as well as the three other entries in this series, are all available on Amazon or are free for Kindle Unlimited subscribers.

When Lady Madeline Parker runs away from Parker Manor and a loveless betrothal, she finally feels like she is in control of her life. But what happens when she realizes she can’t control how she feels? When she finds herself swept into the arms of Harland, a handsome sailor with a mysterious past, Madeline realizes she must choose between a life of order and a man of passion. Can love overcome lies? What happens in the embrace of destiny, on the Tender Wings of Desire?

This novella, released as a KFC promotion/joke for Mother’s Day 2017, was available briefly on Amazon. I believe it was listed at $1, but it was a Kindle Unlimited offering so I grabbed it for free. It’s since been removed from Amazon but still graces my tablet until I decide to return or delete it. 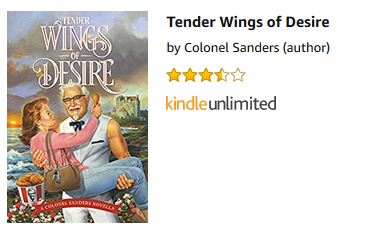 What about the book itself? I have no idea who actually wrote it, but this story ran with the Regency/Victorian era romance tropes and poked some fun, both at the genre and itself. Among the horribly cliche references there was also the occasional, humorous food references, though not quite as many as you’d think given its source.

While this book lacked any semblance of a substantive plot, it was a decently written, fast-paced adventure with a happily-ever-after. I have no idea why it was pulled from Amazon—maybe KFC only wanted it to be on there for a limited time or Amazon was not as amused as me. If it’s ever available again I recommend spending an hour or two of your life reading this short, 96-page story. Though there’s references to the dirty deed, there’s nothing explicit in the book.

Here are some things I highlighted. I tried to note any food references and other funny bits:

“He was on the younger side, and was rather handsome in that blond sort of way.”

“In fact, Madeline was pea green with envy at her brother’s ability to live such a life.”

“…even his beard made him look more manly than unkempt.”

“In that instant, a spark would light and quickly grow into a raging inferno deep within them. They were so consumed that it took every ounce of their restraint not to give into the fire right then and there. The flames would continue to rage throughout the night until the fire was too much, and at last they could let it engulf them.”

(The overuse of fire references would have a writing workshop group twitching in horror.)

“The hills of Kentucky miss you, as do all of us.”

“Yes, I’m a Colonel. Yes, I’m fabulously rich. I am a magnate of the restaurant industry, my dear, the king of an empire that I built with my bare hands.”

While looking for any mention of the novella being pulled from Amazon, I noticed KFC released a video promotion for it back on May 4th.

This must be the month of two-ish star ratings. Maybe now that I’ve consumed so many books, I’m getting exceptionally picky with quality. Anyway, I digress…

Prison Planet Barbarian is a brief spin-off story stemmed from a character, Chloe, mentioned in one of Ruby Dixon’s Ice Planet Barbarian novels. This one leans closer to three stars than the other titles I read this month, but didn’t quite have the magic that Dixon’s writing typically does.

They all stare at me, though. It doesn’t matter that two of them look like dogs and one looks like… well, f— if I know what it looks like. A marshmallow with limbs, I guess.

Some cool world-building is accomplished in this book. Many different alien races are presented, there’s terraforming to make a planet habitable, and a nearly black market type of prison slave labor going on. We learn more about modern Messakah (the “barbarians”) through Jutari, and experience a tie-in to Dixon’s fire dragon series thanks to a secondary female drakoni character—one that’s sane, unlike those in the series.

The planet may be called Haven, but it is anything but. This dystopic prison planet is where exiled criminals are sent. The prisoners—primarily men—are used for labor until they die; the women are used for debasing tasks, and have mastered manipulating the guards through the power of sex.

“Did they send her here because she’s a human, then? Should have sent her to a zoo.”

Prison Planet Barbarian ($2.99 or free on Kindle Unlimited) is a quick adventure with a harrowing escape plot, and the epilogue resolves the story with a HEA. There are no direct links to the IPB series, so I’d recommend it if you really enjoy Dixon’s writing, but not for anyone experiencing her for the first time. (For first timers, check out the Ice Planet Barbarians introductory book.)

The VIP Doubles Down  by Nancy Herkness

Our final bachelor has his moment in the conclusion to the Wager of Hearts trilogy. Author Gavin Miller, suffering from writer’s block, crosses paths with physical therapist Allie Nichols, and things heat up quickly.

With this story I found myself enjoying the first half more than the second. It had good moments mixed in with “meh” moments. I didn’t feel as attached to the characters like I did in the first two books. The pair was okay—Gavin full of wit and Allie a bubbly sort of friendly—but facets of the story began to outweigh their likeable qualities.

“I feel at a disadvantage negotiating without being able to see my opponent’s face.”

Allie spent too much time obsessing over their wealth difference and letting that affect her outlook on the possibility of a long-term relationship. Gavin made a total male-body-part-that-begins-with-a-d move, one affecting Allie’s career and livelihood, that should have been much harder to forgive than Herkness made it out to be. A pretty speech instead of talking things through? Nope, nope, nope, not buying that.

The epilogue redeemed the book, offering a perfect wrap-up to the entire series. Thank goodness for that.

The VIP Doubles Down is $4.99 on Amazon or free to Kindle Unlimited subscribers. If you’re new to the Wager of Hearts series I recommend reading these books in order. While this entry was definitely not the series highlight, the stories of three powerful men throwing down a crazy wager will keep you captivated.

“Sometimes I get lazy and just look out my window when I need a description.”

That’s it for May! At this point I’m uncertain if June will bring more reading, gaming, or writing time.