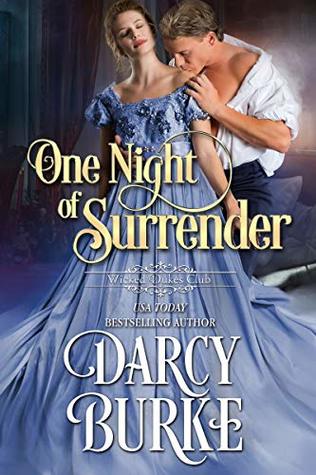 One Night of Surrender by Darcy Burke
My Rating:

One Night of Surrender is the second book in the Wicked Dukes Club series, co-written by Darcy Burke and Erica Ridley.

Isabelle and Valentine were once lovers from different walks of life, separated by life and duty. Both are widows of unhappy marriages. Neither wants to relive the experience again.

Financial troubles led Isabelle to become a governess, and when the family she works for lodges for a temporary stay at Valentine’s townhouse in London, the two are reunited. Isabelle tries to avoid Valentine, while Valentine is thrilled to see his former love interest and pursues her. She finally opens up, and as they uncover each other’s pasts, the two must reconcile what they are willing to let go of if they want a future together—especially after Isabelle’s employer puts her life into sudden upheaval.

Valentine started out as the typical English lord, selfish and presuming in how he could solve the problems of a lower-born woman. As he evolves, he sheds some of the lordly veneer that holds him back from fully realizing their relationship. Isabelle is guarded as well, with good reason: she’s been treated poorly and taken advantage of in her life. Her hesitation is perfectly in-character, and as her guard drops, it feels completely natural. Both Valentine and Isabelle are conflicted in what they want from the other, and that’s where Valentine’s sister and grandmother, who are both fantastic side characters, come into the story as the voice of conscious and reason.

I enjoyed how Valentine and Isabelle opened up and accepted the new, more mature, versions of each other. The conclusion felt pretty rushed, however, and while I enjoyed Valentine’s sister and grandmother, their role may have been too great, taking away a bit of Valentine and Isabelle’s agency. I would have also liked for the epilogue to be a proper chapter, with a small time jump forward to see how post-marriage life treats the two. That aside, the story moves at a good pace, and is a great example of how feel-good a second-chance romance can be.