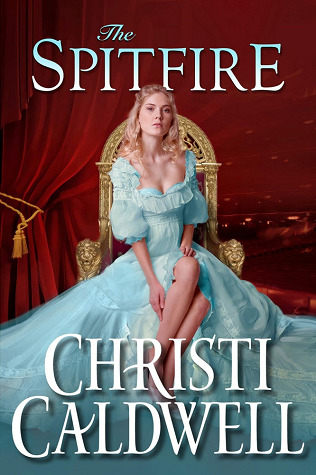 The Spitfire by Christi Caldwell
My Rating:

The Spitfire is book #5 in the Wicked Wallflowers series. Even though it’s a departure from the Killoran family featured in the first four books, and wasn’t in Caldwell’s original plans for the series, this is the best book of the five.

Clara Winters has left behind the life as a courtesan and madam to become a self-made woman by opening a respectable music hall to be enjoyed by the masses. Henry March is an earl living a tightly-ordered life, obsessed with creating law and order across London. A late-night attack in Clara’s neighborhood leaves Henry nearly dead and Clara as his rescuer and nurse. Despite the provoking thoughts and interesting banter the two have, can their new-found friendship survive Henry’s return to politics?

This story didn’t have an insta-love situation and instead, Clara and Henry grow to know and love each other over many weeks. Both characters changed a lot from their involvement in each other’s lives. Clara grew beyond the shell of a woman who was burdened by her past and Henry emerged as a person who learned to love and appreciate who was around him, not just what he could accomplish.

The plot was engaging and moved quickly. Neither Clara nor Henry are perfect, and their flaws play well into the story. The first chapter kicks off so unconventionally that you can’t help but be hooked.

Henry’s sister, Lila, was a great supporting character in this story. She has her own demons and they won’t be easy to conquer. I’m hoping that she gets her own book someday, as her story is bound to be compelling.

This book was nearly a five-star review from me, which is rare. The reason it lost half a star is a sad but increasingly recent trend in historical romances: there is no epilogue. The final chapter did bring the main plot to a satisfying conclusion. But I want a look at the ever after part of happily ever after. I’m left wondering too much⁠—will they actually get married, will society cause problems, will they ever have children, and much more. Does all of that need answered? No. But without any of it, this story ends with a happily for now.