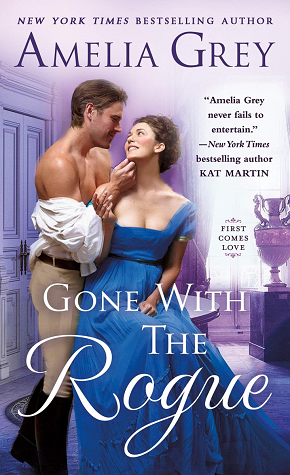 Gone With the Rogue by Amelia Grey
My Rating:

Julia Fairbright, widowed following her husband’s death at sea a few years before, desires freedom for herself and her son, Chatwyn, yet lives in fear of her powerful father-in-law. The duke threatens to separate Julia from her son if she doesn’t follow his stringent rules—but she uncovers a secret that may give her the independence she seeks.

Garrett Stockton didn’t come back to London to fall in love, but a chance encounter with Julia in the park changes everything. Her independent spirit calls to him in a way that his life on the sea never has. In a city where he could never see a future, he begins to envision a life, a home… more. But first he must convince Julia that he’s here to stay, and assist in her quest to break free of the duke.

Gone With the Rogue charmed me with the build-up to Julia and Garrett’s relationship as well as the way that Julia was fiercely independent. Her emotions have been trampled on for years, and she bursts free on each page. It was exciting watching how she tackled one thing after another, whether it was something as simple as freeing a butterfly net or as complex as unraveling her desires and allowing herself to take a chance on love.

The book was quite thorough with its historical details—at times to a fault. I found myself skipping over the occasional paragraph where things (such as the customary habits of gentlemen of the times, etc) were described in excruciating detail, and didn’t feel like that detracted from my enjoyment of the book at all. Those parts pulled me out of the story, so it was easier to skip to where I would stay engaged.

Julia and Garrett’s story is one of change and acceptance. It’s full of intrigue and daring. We know who the villain is and we root for our hero and heroine to succeed in thwarting him. They make a wonderful couple and it was a joy seeing them work for that happily-ever-after.

With the real world in turmoil right now, I think we should all embrace every shred of joy we can get.

Gone With the Rogue is out now and available in eBook and paperback formats.

Side note: There was one interesting word I noted being used a lot in Gone With the Rogue. It’s a word that doesn’t bother me personally, but I recall it being ranked the most disliked word when one of my BA English courses was discussing etymology: moist. Instead of licking her lips, Julia was moistening them… and so on. It wasn’t a lot, but enough for me to notice. So if this word makes you cringe, be prepared to do so on nine separate occasions.