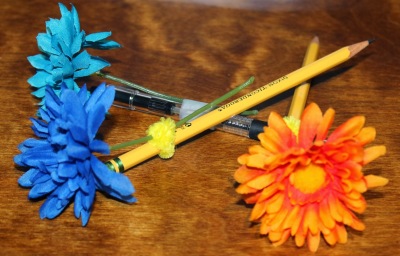 My day 21 project was Pen & Pencil Savers. The idea came from my local prescription store, where they have these large artificial flowers on their pens because they got tired of having to replace them all the time.

While I don’t have customers to worry about, I have children. My youngest is the worst. He has an entire bucket of his own pencils a mere two rooms away from my computer desk, but he’ll go out of his way to come and borrow one of mine, then just leave it where he used it and half the time I’m lucky to find it again. He’s trying to be better at it after we discussed it, but it still happens from time to time.

For this project I used a few artificial flowers I had gotten on clearance at Michaels, a couple of pipe cleaners (for the pencils, so the flowers can slide up/down if the erasers needs to be used) and scotch tape (to hold it onto the pen). The store I got the idea from uses rubber bands to hold theirs in place. 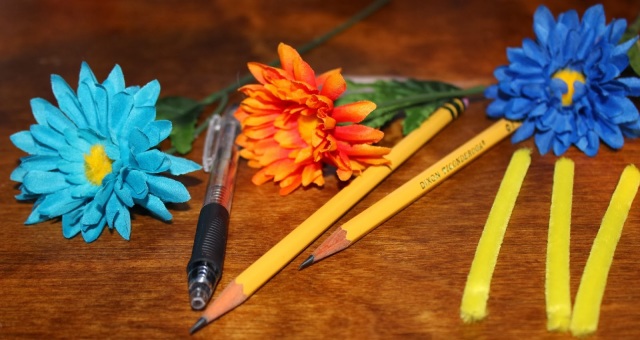 I trimmed the stems enough for there to be still room for it to slide around a bit, but not so long that they interfere with writing. The scotch tape on the pen is self-explanatory, and with the pipe cleaners I did a small wrap around the flower stem, then wrapped the remainders around the pencils.

That’s all there is to it! I don’t know yet how well it will work, but if anything, they’ll definitely be easier to find. Bonus: my desk looks a bit prettier now, as well!