Earlier today I posted about my packing organization, but this post is a focus on tips to consolidate space, stay healthy and more!

1. Use a contact lens case to carry small quantities of lotions, etc

I don’t use too much lotion or aloe while I’m traveling, but it’s nice to have it just in case. A contact lens case saves me from carrying two travel-sized bottles around that I’ll barely use. NOTE: If you use contact lenses, mark your actual case quite clearly!
END_OF_DOCUMENT_TOKEN_TO_BE_REPLACED 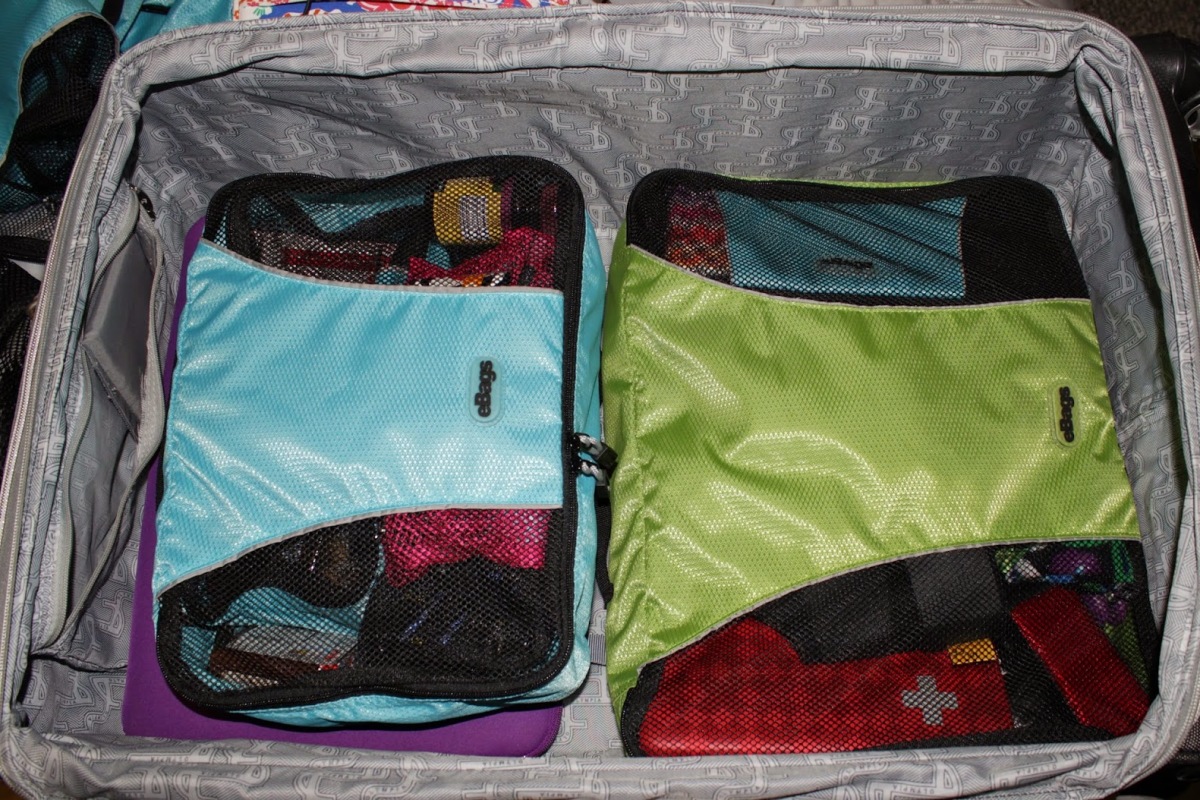 (check out the second part of this post: Last Minute Packing Tips!)

This is my 6th year attending Fan Faire/SOE Live, which for me is a trip mixed with work and play. For this year it’s doubly compounded, as my usual once-a-year convention turned into four after attending January’s Year of EverQuest/Landmark alpha launch event, June’s E3 convention, this week’s SOE Live and finally, BlizzCon in November.

Over time and with more frequent travel, I’ve not only learned some valuable things (like bringing along snacks for those days you miss meals, and that Vegas hotels do not have their own coffee pots) but also have had to bring along more and more equipment for work. This year I’m toting around a laptop, DSLR camera with an extra lens, digital voice recorder, my phone, a tablet, and all the crazy accessories associated with all this, just to name a few.

So with all these things you need to be organized. Or at least I do. I like to be able to grab a bag and know that my backup batteries are in it. I like having all my toiletries in one accessible spot.

Today’s project was a Plastic Bag Dispenser, though it would be more accurately titled “Self-Dispensing Plastic Bags.” I used the bag rolling technique shown on the Tater Tots and Jello blog. Unlike their blog post, I didn’t have a container available to put them in, but considering how well the rolling technique worked I’ll be saving one to toss the bags into in the future! 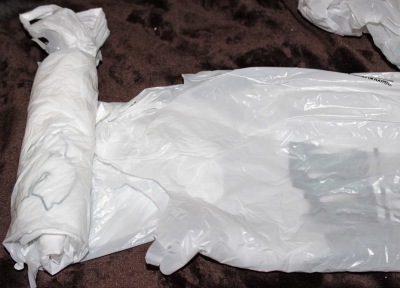 It’s pretty simple: lay the bags flat, fold in half length-wise, first one with the handle sticking out. You then roll the bags one-by-one in a line, with their overlapped handles on the end of the previous bag. The Tater Tots and Jello post shows each step in detail.

My bags weren’t rolled as neatly, but that will take some practice and patience.

My husband was very dubious that it would work, so I pulled a bag out and… 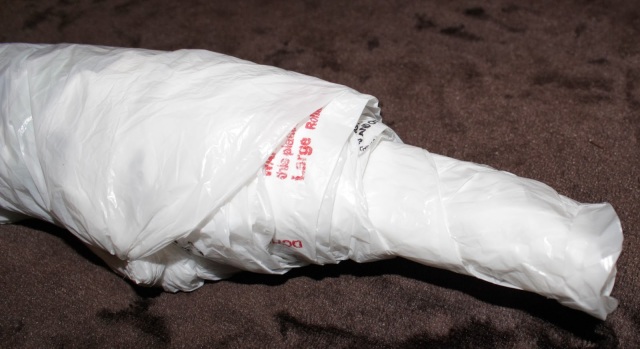 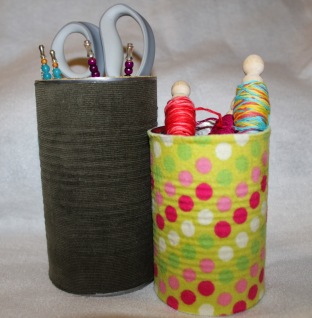 Today’s project was Fabric Covered Tin Cans. It was supposed to be a Confetti Bowl, but I didn’t have all the supplies like I thought I did, so I swapped the two days. Hopefully I can obtain the appropriate supplies this evening!

The tin can project is quite simple. Wash out some tin cans (I only used cans without a sharp inside lip), size your fabric scraps to fit around them, then apply Mod Podge with a foam brush on the exterior of the can while slowly wrapping the fabric around. You can paint the can beforehand if you want to make it stand out more.

That’s all there is to it! Use them to store whatever floats your fancy. 🙂 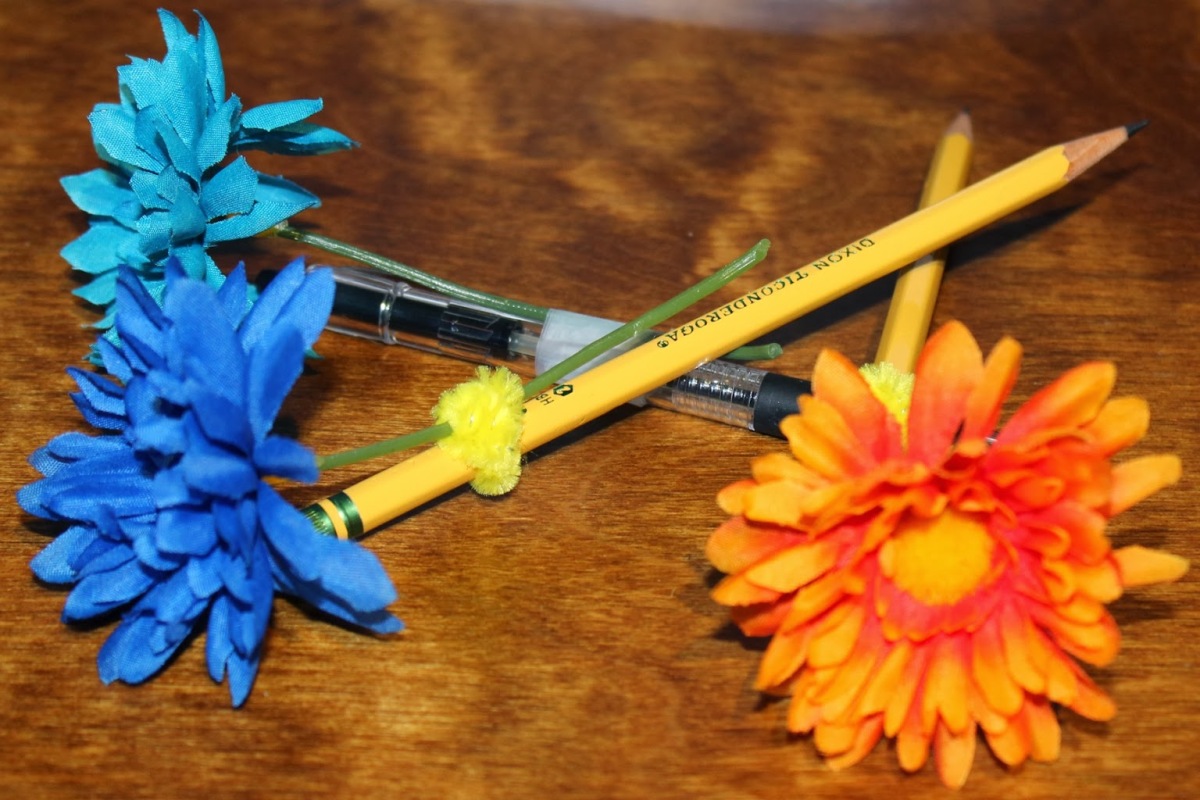 My day 21 project was Pen & Pencil Savers. The idea came from my local prescription store, where they have these large artificial flowers on their pens because they got tired of having to replace them all the time.

While I don’t have customers to worry about, I have children. My youngest is the worst. He has an entire bucket of his own pencils a mere two rooms away from my computer desk, but he’ll go out of his way to come and borrow one of mine, then just leave it where he used it and half the time I’m lucky to find it again. He’s trying to be better at it after we discussed it, but it still happens from time to time.

For this project I used a few artificial flowers I had gotten on clearance at Michaels, a couple of pipe cleaners (for the pencils, so the flowers can slide up/down if the erasers needs to be used) and scotch tape (to hold it onto the pen). The store I got the idea from uses rubber bands to hold theirs in place.

I trimmed the stems enough for there to be still room for it to slide around a bit, but not so long that they interfere with writing. The scotch tape on the pen is self-explanatory, and with the pipe cleaners I did a small wrap around the flower stem, then wrapped the remainders around the pencils.

That’s all there is to it! I don’t know yet how well it will work, but if anything, they’ll definitely be easier to find. Bonus: my desk looks a bit prettier now, as well!