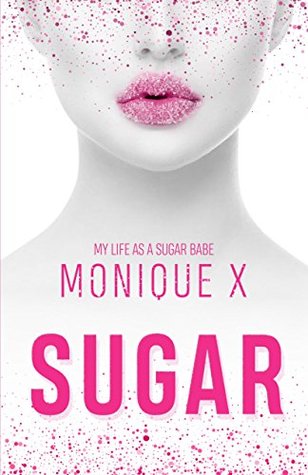 Sugar: My Life as a Sugar Babe by Monique X
My Rating:

Head’s up: despite the book’s blurb sounding otherwise, this book is a memoir.

There’s nothing quite like reading an entire book, and still wondering when the story will start by the time you reach the end. It may be titled “Sugar,” but not an iota of sweetness has been left in my memories.

The book’s first chapter walks readers through Monique’s ritual to prepare for her sugar dates—which are dates she has with older men, keeping them company (sexually or not) in exchange for money. But as we’re told about 300 times throughout the story, it’s not like being an escort. The narrator breaks the fourth wall a couple times here, but that can be excused, if it had been an isolated incident (spoiler: it’s not).

After the second chapter delved into her terrible childhood and former marriage, I figured the book would jump back to the present. So I read chapter three… then four… and eventually got to chapter 30, aka the final chapter. As I flipped the final page, disappointment assailed me. The scene that had us in the moment in chapter one never returned.

When I grabbed an advanced reading copy of this book from Netgalley, it was mostly because of the awesome looking cover (which I give 1 star to by itself) and blurb, but also because I figured the categories on the site (it was listed as Erotica, Romance) don’t lie. This “erotica” book had sex scenes that would have made my teenage imagination proud. They were sometimes weird, but mostly as boring and flat as the dialogue.

After I finished the book, I flipped back to the cover, and then jumped to the “front matter” section, which appears before the table of contents, and is automatically skipped when you load an eBook. That’s how I discovered that “Sugar” was a memoir, unlike what the book blurb would like you to believe.

Well, then. It’s cliche to pity people in romance books, so I won’t do that here, either.

I received an ARC via Netgalley in exchange for an honest review.