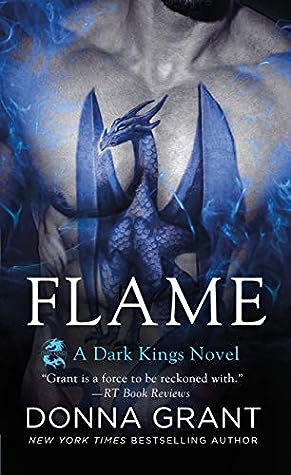 Flame by Donna Grant
My Rating:

Flame is book #17 in Donna Grant’s Dark Kings series. I’m going to start with a disclaimer: when I requested an ARC of this book on Netgalley, I had no idea it was so deep in a series as the cover and title did not indicate as such. This is the first book I’ve read in Dark Kings and my opinions are likely skewed by that fact.

Living among the Dragon Kings, Cain has spent lifetimes learning to distrust both mortals and Fae. He is a warrior born—and every instinct demands that he fight to keep his own kind safe. But when a fringe member of the Dark Fae contacts the Kings with an urgent warning, Cain is torn for the first time. How can he trust this beautiful creature when resisting his primal attraction to her is battle enough?

Noreen is horrified by what her kind and the malevolent Others are planning for the Dragon Kings. Dark Fae or not, there are lines she will not cross—even if it means risking her life. But she never imagined that she would risk her heart until she meets Cain. She wants him with a soul-deep desire that frightens her…and endangers them both. Is saying goodbye to everything Noreen has ever known worth a love that will span time and realms?

Flame is backstory heavy, which was helpful to someone who didn’t read the prior books. The fantasy setting, alternate Earth setting, and various types of magical people were described and thought-out quite well. The epilogue did a good job of setting the stage for the next book in the series.

However, after a few chapters of backstory it began to feel like bloat that an editor should have suggested large cuts to, and combined with lack of action and development by the main characters, it made this book difficult to get invested in.Overall, I felt no attachment to the two main characters, Noreen and Cain. Their backgrounds are detailed well but due to being stationary most of the book, it didn’t feel like I got to know who they currently are. They seemed to lack motivation to do anything other than talk and have a few rounds of sex. This pair falls in insta-love in less than a day, which is great if you are purposefully reading an insta-love novella and not-so-great if you’re reading a 407-page story that should’ve given time for an organic romance.

Adding to the book’s bloat were many chapters from secondary character points-of-view that were likely relevant to the series’ overarching plot, but primarily irrelevant to Flame‘s plot. It was interesting to see the antagonists’ view in a few of the chapters, but otherwise the secondary protagonists did practically nothing to further the story. I didn’t do a count but it felt like at least half of the chapters were not from the main characters’ point-of-view.

At 70% through the book, there is finally action. Though there’s another spurt of inaction/backstory before the end, this is when it finally felt like the story picked back up for the first time since chapter four or five. The climax is interesting — until suddenly it’s left unresolved. That’s not to say that the book ends there, just that the main plot of this book is left hanging to be finished in the next. After so much reading to get to this point, it left me unsatisfied.

There were days between my reading sessions of Flame because I simply lacked the interest to go back to it (also why my review is after its release date despite starting it prior). It’s not that I was feeling lost in the story due to jumping in so deep in a series, but simply because the majority of the book was boring. I imagine that someone who has read and enjoyed the series up to this point would have a much better impression of the book than me. Unfortunately, Flame left me with no desire to check out the earlier books in the series.

Flame is available now in eBook and paperback formats.