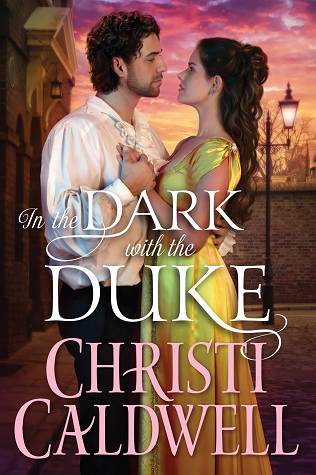 In the Dark With the Duke by Christi Caldwell
My Rating:

In the Dark With the Duke is book #2 in the Lost Lords of London series, and features a supporting character from one of Caldwell’s 2019 releases, The Spitfire. It can be read as a standalone, but reading The Spitfire first will give further insight into Lila’s growth as a character.

Lady Lila March is spunky and tenacious by night and filled with terror by day. Her past trauma from the events at Peterloo, where she was trampled during a military crackdown against the lower class, has scarred her both figuratively and literally. Lila seeks a way to cope in the world so that she doesn’t feel quite so helpless, and that connects her with Hugh Savage.

Hugh has experienced a life of violence and shame. He loathes what made him the man he is today, yet is still drawn to Lila’s entreaty for help. Events unfold that change his life in drastic ways and he must determine what from his past to hold onto, and what toxic pieces are worth shedding.

Both Hugh and Lila have good character growth in this story. They both have troubled pasts and demons, and while those will continue to haunt them, it bridged a connection between the two and allowed them to move forward in their lives.

In the Dark With the Duke starts out slow but picks up its pace about nine chapters in. It continues the discovery of the lost lords of London, revealing that the underground network of stolen noble children may be deeper than anticipated in Caldwell’s previous books (the first lost lord was found in the Wicked Wallflowers series).

I feel like a broken record at this point with Caldwell’s books, but I’ll say it again: the book needs an epilogue. We’re left not knowing what happens with Hugh’s partners or the antagonist of the book, and since both were involved in the plot, no epilogue leaves the ending feeling rushed and unresolved. (Don’t worry, there’s still a HEA. I’m just picky and want to know how everything works out, not just the relationship.)

In the Dark With the Duke is available now in eBook and paperback formats.