Sapphire Flames is the fourth Hidden Legacy novel by Ilona Andrews and the first in a new trilogy. So completionists, be warned: the main plot of this book is solved, but neither the romance nor the overarching plot will reach a conclusion until the end of the current trilogy.

I had not read the previous three Hidden Legacy books. While I was a bit overwhelmed by the various unique terminology at first, everything was explained well enough, and naturally enough, throughout the course of Sapphire Flames that someone new to the series would feel just as welcome as a returning reader.

In a world where magic is the key to power and wealth, Catalina Baylor is a Prime, the highest rank of magic user, and the Head of her House. Catalina has always been afraid to use her unique powers, but when her friend’s mother and sister are murdered, Catalina risks her reputation and safety to unravel the mystery.

But behind the scenes powerful forces are at work, and one of them is Alessandro Sagredo, the Italian Prime who was once Catalina’s teenage crush. Dangerous and unpredictable, Alessandro’s true motives are unclear, but he’s drawn to Catalina like a moth to a flame.

To help her friend, Catalina must test the limits of her extraordinary powers, but doing so may cost her both her House–and her heart.

Catalina was an interesting character who is aware of her responsibilities to her House. She is guided by her morals and struggles with rationalizing putting her family in danger and doing the right thing by helping a friend. She could do with a bit less of letting “Victoria Tremaine’s granddaughter rise to the surface,” but I do like Catalina’s strength and goals. However, soon she’s in too deep, and that’s where Alessandro enters the picture. END_OF_DOCUMENT_TOKEN_TO_BE_REPLACED 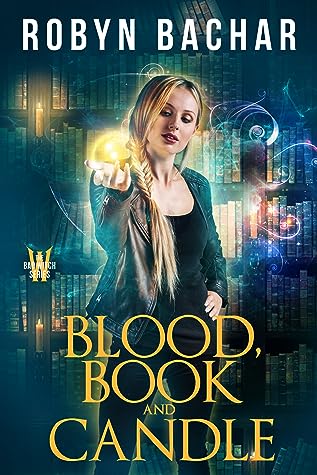 Blood, Book and Candle by Robyn Bachar
My Rating:

Blood, Book and Candle is the sixth book in the Bad Witch series. The first book, Blood, Smoke and Mirrors, is available for free in eBook format. I strongly suggest reading it if you’re new to the series, otherwise the world and overall plot that Bachar has created may be confusing and unengaging. I reviewed book #1 two days ago; you can check that out here.

Someone is hunting magicians, and Anne Williams is on their list.

Anne is a Seer, a magician who gets visions about the past, present, and future. Most of her life she hid this fact, pretending to be a Librarian, but recently that knowledge has become public. When Anne is attacked, she finds herself within the protective wards of a Chronicler’s home. Simon St. Jerome—whom she discovers is her soul mate, and not for the first time. He’s immortal (fangs and all), and Anne’s past self didn’t survive the immortality ceremony.

This book leaned a bit more heavily on the romance storyline over the main plot, but Anne and Simon are both very strong and very interesting characters, so it was fun to discover how their past and present collides.

Most of the action occurs as the pair hunt the hunters—a group of demons and non-magical humans seeking a way to harness magician magic for those without. Anne’s powers can help turn the tide for local magicians. Everyone around her fears her involvement because she has neither defensive nor offensive magic, but Anne proves to be a warrior princess who was prepared in advance.

It was awesome reading a female character who wasn’t the one that needed rescuing. That’s an easy cliché for authors fall into, but with Anne, we’re given a character who is aware of her limitations and did something to overcome that.

The drawbacks of this book are similar to the same criticisms I had of book #1. While Anne and Simon were much more interesting characters than Lex and Catherine from the first book, Blood, Book and Candle is again only a single first-person narration from Anne’s point of view. This is somewhat more bearable because Anne’s powers make her able to surface read some thought impressions from Simon, but I still wanted to join Simon for his part in the story as well. The worst offender that kept this book from being four stars for me was the sudden ending. While Anne and Simon were involved in the final scene, the story wrapped up focused on a secondary character’s story. I enjoy when books give glimpses of the next story to come, but there should have been one more chapter to bring Anne and Simon’s story to a more satisfying conclusion.

Given that both books #1 and #6 had the same style of one narrator and sudden ending, it’s safe to expect this type of writing from any of Bachar’s books.

That aside, these are dynamic characters in an intriguing world rife with conflict. I enjoyed my time with Anne and Simon, would read it again, and do look forward to the next in the series. It’s fun, it’s action-packed, and full of heart. 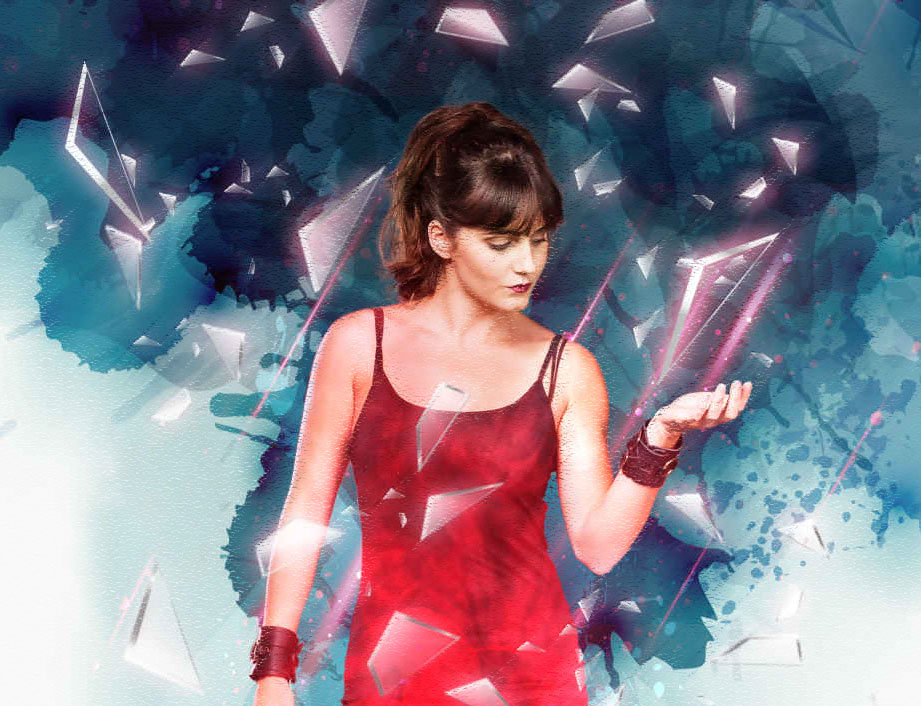 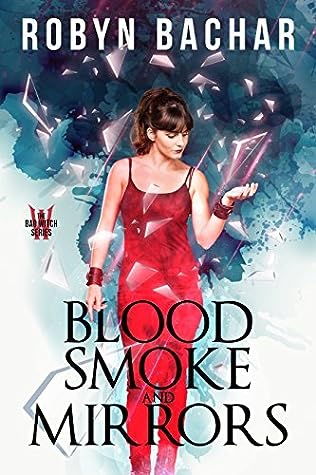 Blood, Smoke and Mirrors by Robyn Bachar
My Rating:

Blood, Smoke and Mirrors is the first book in the Bad Witch series. I’m currently reading the upcoming book #6 for Netgalley, and the author’s note suggested to grab book #1 first if you’re new to the series. Since it was a freebie, I happily took that advice, and I am so glad that I did—book #6 would’ve been fairly confusing without it.

In Blood, Smoke and Mirrors, we meet Catherine Baker, who is a witch, and Alexander “Lex” Duquesne, who is a guardian. Catherine and Lex have a romantic past, but their relationship ended several years prior when Lex did his guardian duty and turned in Catherine for causing harm (which isn’t allowed for a witch) when someone attacked her. Self-defense or not, she was exiled; rightfully so, she felt betrayed.

Lex comes to Catherine when their region’s Titania—an ambassador of sorts between the human and faerie realms—is murdered. Not only does Lex believe that she should try to become the next Titania, but he also has a warning: her death might be next. Like it or not, he’s there to protect her.

This book had a lot of magical action going on. At times, and especially after Catherine becomes a guest to a vampire, I teetered on the brink of thinking that there was more happening than my brain can believe is possible. Catherine goes through the good and the bad—mostly the bad—on her path to reclaiming her role in magical society. While the many events acted as a fantastic introduction to the hierarchy of magicians and the world Bachar is building, it neared overwhelming.

Despite, or because, of that, there was also never a dull moment. Catherine and Lex rebuild their shattered relationship and show the magical world what a power couple they are. This is also where I think the book didn’t do itself any favors by only being narrated in Catherine’s first person point of view. I wanted to see inside Lex’s head and understand more than what he chose to say to Catherine about why he turned her in and how he felt afterward. Because we’re missing his point of view, he doesn’t seem to develop as much as a character as Catherine does until near the end of the book. (We’re also subjected to the “Big Misunderstanding” romance trope because we have no insight to his thoughts.)

The secondary characters are quite interesting as well (and I was thrilled to discover that one of them is the male lead in book #6). They offer more insight into this world of magicians and give opportunities for levity in an action-laden environment. They’re dynamic and offer this world further potential to expand.

One of the biggest complaints I see in other reviews is that Catherine is a weak character. I have to agree with that—she’s quite pessimistic about herself, her family, her past with Lex, and her limitations as a witch for much of the book. I’m willing to accept that if she’s bound by a “do no harm” tenant (which there should be a self-defense exception for, but I digress), that she’s unwilling or untrained to use her magic offensively. What makes Catherine appear weak is her mental state, and unfortunately that lasts longer than it should. She does progress, but also regresses; it’s not until we’re nearly at the sudden finale that she hits her stride.

While this series opener has some rough spots, it’s still a fun read and holds a lot of promise for the series. I would have liked to spend more time with these two in the final chapter instead of being rushed through the ending, especially since it was such an ordeal to get to that point. There are details that aren’t wrapped up (related to the overall series plot), but the main story of Catherine and Lex does reach a satisfying conclusion. The couple does have a second book (Bewitched, Blooded and Bewildered; #3 in the series) that wraps up one Catherine-related event left unresolved in Blood, Smoke and Mirrors. I have yet to read it, but the reviews are complementary.

My review for Blood, Book and Candle (book #6; releases July 22) will hopefully be up within the next few days. I’m finishing up three summer semester courses this weekend, so that comes first. If you’re interested in checking out the series, you can grab the Blood, Smoke and Mirrors eBook for free.

I’ve never read anything by either Neil Gaiman or Terry Pratchett before, so I went into Good Omens with no expectations. The story focuses on the coming apocalypse, its players, and how the forces of Good and Evil are working to sway things their way.

This is a repost of my original December 2016 book review, with an update about the May 2019 Good Omens miniseries.

UPDATE (June 2019): Good Omens has been released as a miniseries on Amazon (and is free for Prime members to watch). It encompasses the heart of this book and (in my opinion) excels it through its engaging visuals, actors, and storytelling. My criticisms regarding the book are not an issue in the miniseries. Watch it here!

(The book review continues below.)

The story is a fairly quick read, though the first 50-60 pages are a bit tough to get through. I consider myself to have a good sense of humor and enjoy a lot of British humor, and while I could recognize all the things that should be funny, I have to admit none of them actually made me laugh. (Had I been about 10 years younger? Probably.) But the writing was lighthearted and poked fun at everything, a contrast that worked well with the subject matter.

END_OF_DOCUMENT_TOKEN_TO_BE_REPLACED 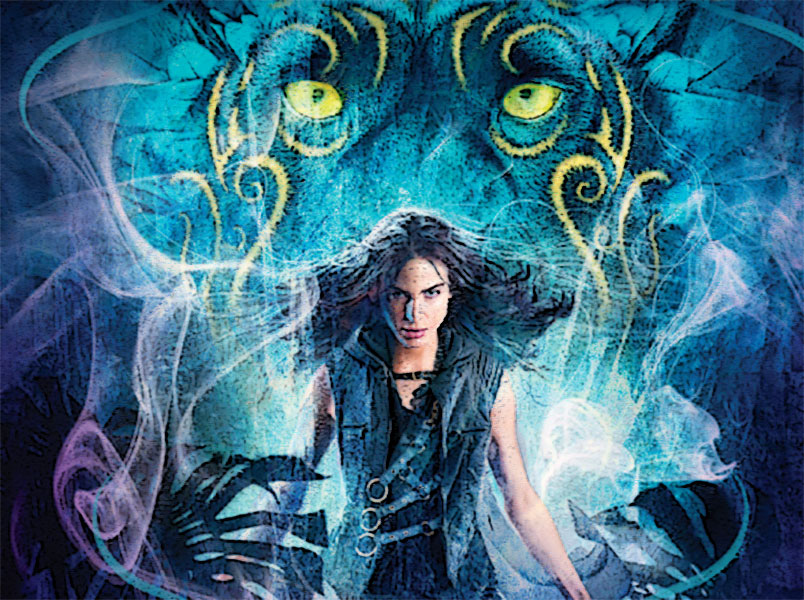 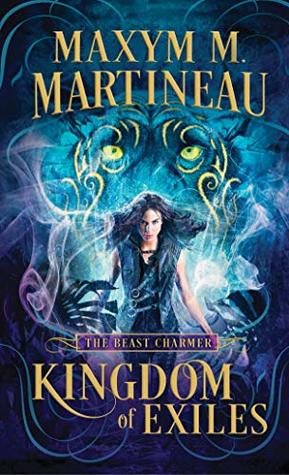 Kingdom of Exiles by Maxym M. Martineau
My Rating:

Kingdom of Exiles is a unique, action-packed fantasy romance. The strong start to this series promises that great things will follow.

Leena Edenfrell is a Charmer, a person who can tame magical beasts of varying classes. “Taming” sounds simpler than it is, too — sometimes the act requires self-sacrifice or willingness to endanger oneself. An unfortunate circumstance led to Leena being exiled from her homeland and she seeks a way to return home. END_OF_DOCUMENT_TOKEN_TO_BE_REPLACED

I don't know why the empty cup is so exciting. #cats #catsofinstagram
Boss: *emails PDF* can you help us update this poster? Me: do you have the original of that instead of a PDF? Boss: *carries poster to my office* here's the original Me: ... Boss: I'm practicing my dad jokes
I didn't get through all my holiday earring finds this year, but the ones I did were a mix of cool/funny/ghastly. #earrings #fashion #holidays #clearancefinds