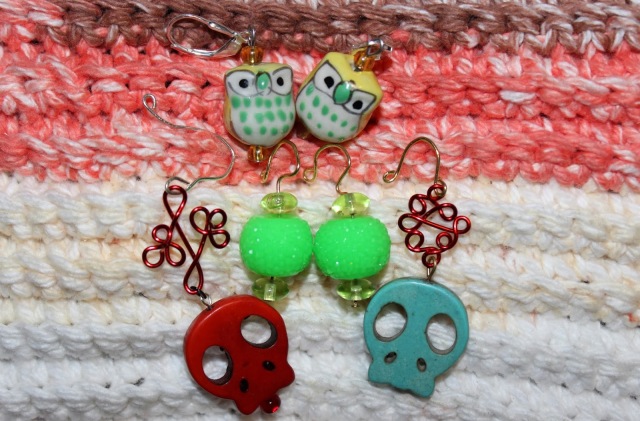 My day 27 project were Crochet Stitch Markers. A while back my mother-in-law (whose beautiful dishcloth is included in the picture above) had asked me to make her some, but not researching what in the world ones specifically for crochet would look like, the stitch markers I made weren’t able to be removed, and therefore became keychains. It’s past time to rectify that mistake, and that’s the heart of today’s project!

I checked Pinterest over the weekend and found a few different styles. The three major ones I found were leverback findings (similar variation here), curved wire findings, and safety pins. Of the three, I made stitch markers with leverback and curved wire findings. I also used some random chunkier beads I had, including the yellow owls shown in one of those linked pins, and a couple of wigjig wires that were abandoned.

The assembly is straight-forward, aside from curving the wire. To be honest, I just winged that part. It made them inconsistent, but they turned out alright. After trying out both types, I definitely like the leverbacks the best.

Tomorrow’s project is an Embroidery Floss Friendship Bracelet. It also begins the first project I’ll be doing while traveling. I will try my best to at least post a picture of the finished product!