This afternoon I had a friend post the following:

“Over the past year or so I have seen a number of people post an image that says that in many ways your online friends are more your friends than your real friends and family. Not only do I disagree with this notion, but I find the idea that some people actually believe it severely disturbing. Your real friends and family are the ones who, when you hit rock bottom and your online friends are too distracted by the latest meme or their own lives to bother with you, are still there for you and still willing to offer their support.”

Maybe my perspective is skewed because I spend so much of my social life with online interactions due to my job, but I have to disagree with the above. I partially agree with his original assertion that your family means more than your online friends (and even then that’s subjective based on your familial relationships), but I have to say that I have many online friends who mean a lot to me and that I believe would be (and have been) there for me (and vice versa) even through hard times.

Here was my response:

tl;dr: More, no, but they’re not meaningless.

In general, there’s a lot of people you meet online that have zero impact in your real life. Do I have an attachment to some random Joe that tweeted a question to me, or someone who asked to start a game in Words With Friends? Heck no.

However, there’s always exceptions. I originally met both you and the hubby online. Did that time before meeting in person make our friendship or my relationship with him not really exist?

That’s just one example. One of my closest friends lives in Alaska, and I only see her once a year and originally met her.. online. I have many friends out in San Diego and other places who I originally met online, and sometimes get to see once a year. Being able to interact with those people online in-between the rare chances we get to hang out means a lot to me.

It was one of those friends who recently stayed by my side while I cried and mourned my co-worker’s death (my online co-worker whom I also consider a friend) while in CA a few weeks ago. You can say that was my lowest point in quite some time and she didn’t run away, instead she hugged me and talked to me and made sure she stayed as long as I wanted her to. She could have easily walked away to go do the job she was supposed to be doing, but instead she dropped it all for me.

None of that means that I think any less of my family at home. They are always there for me as well and I love them very much. We have fantastic times together!

So do my online friends mean MORE to me than my real life family? No, but I would be lying if I said they didn’t mean anything just because the majority of the year they’re simply pixels on my monitor. 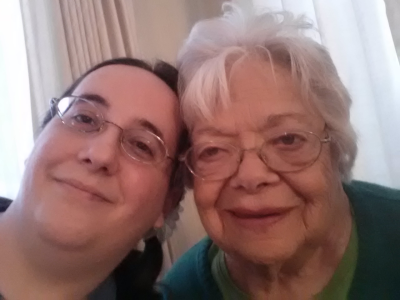